Should you have any problem in posting, registering, or login, please do not hesitate to contact the admin at Marshall.centre(at)gmail(dot)com. In the subject, please use "Help needed for www.helico.com"

Advertisement is not allowed. While we encourage discussion, please try not to promote your website, goods, or unproven treatment here.

This is a non-profit website. We will try our best to help anyone that has question about H. pylori and their treatment. We shall provide the most accurate answer about H. pylori. You can help us by clicking here to keep this forum alive.

Some useful guides
How to post in the forum?
Management of Helicobacter pylori infection—the Maastricht V/Florence Consensus Report
The 5th Chinese Helicobacter treatment consensus
How long should I wait before doing follow up breath/stool test?

If you are confirmed with H. pylori, in your convenient time, please help us with the symptoms survey that you are experiencing.
Symptoms survey
(contributed by frostyfeet)

My Dog Died Because of Undiagnosed HP

The initial animals infected with human Hp were germ free piglets. After that beagle puppies, pigs, mice, cats and, best of all, Mongolian Gerbils. The latter animals develop ulcers and stomach tumours in the presence of salt and carcinogens - similar to humans. There is much work to be done in this area.

My Dog Died Because of Undiagnosed HP

Thank you so much for this website and forum. In 2004, my bulldog rescue was autoimmune compromised from months of treatment for skin disease and two surgeries - a tail amputation and abdominal Cryptorchid tumor removal.

He started out apropos of nothing, vomiting yellow bile. My experienced vet was out of town and his junior partner prescribed pepcid. At the time I thought it odd but did it. Several weeks later, still under vet care, his occurances increased and finally he vomited severely. From that time on, he could not keep food in his mouth or swallow.

As it happens, he contracted Megaesophagus (ME)from the violent vomiting coupled with being immune compromised. (That disease is gi and neuro combo). When a dog has ME he has trouble swallowing food and keeping it down, because the esophagus has lost elasticity due to some break in the connection to the brain. They regurgitate food and water stuck in the esophagus and also what is in the stomach.

Not to be confused with vomiting (a clear difference if you watch the abdomen) wherein vomiting has another underlying condition that you have to diagnose. ME does not produce vomiting and yellow bile all the time and usually a gi disorder does. With ME you see effortless regurgitation without heaving of the abdomen.

ME can mostly always be diagnosed by a barium swallow series on xray. You should never do a scope unless you're desperate because the dangers of the procedure can make things much worse. The anesthesia, trauma from the scope and also human error performing it.

ME is most often fatal. But I insisted in knowing the underlying condition so I had him scoped. (also life threatening for a dog especially in this condition).

The vet (a local famous Internist specialist) prescribed one antibiotic and Carafate/Sucralfate. I FOUND DR MARSHALL's treatments online - triple and quadruple therapy - and had to fight with the vet to PROVE my dog needed a different protocol but he essentially refused. I went back to my local senior vet who IMMEDIATELY prescribed the quad therapy.

Thank goodness for Carafate, too.

He also provided Reglan, a motility med that had tremendous adverse side effects that made my poor dog act like he was on LSD. At the time, these side effects were denied by the industry but my research showed (by a survey with other people with dogs on the medication on a forum like this)...that 75% of the dogs had the same serious side effects including near death. This is because Megaesophagus is also neurological so Reglan impacts them double hard.

Reglan, when it works, moves the food down through the gi tract faster, speeding up motility so that in theory the dog won't regurgitate it. Most people who use it without severe side effects in their dogs will lower the dosage to the threshold level that hides obvious symptoms, but you STILL see some...like being neurotic or aggressive or anxious or unpredictable, or hiding for no reason etc.

Anyway, the entire event was dramatic including me getting meds compounded by my compounding pharmacy in the effort to get them to "stay down".

My sweet dog, heroic and stoic throughout, had to be euthanized a month later. His condition was so far gone, and only a feeding tube MAY have helped but he was in no shape for that surgery and ME is not statistically reversible in this case. The "yellow bile" took too long to improve, he was still vomiting that small amount of food that he could even ingest and nothing was absorbing. (the food he could eat was thanks to a custom vertical feeding chair and 5-6 meals per day sitting in it 30 minutes each time where you either toss meatballs down directly into the stomach or use a milkshake texture that should go directly down, avoiding the loose pockets of muscle tissue that lost elasticity in the esohpagus ).

Any pet owner who finds this site, I hope will read this post and know that there is HELP for your dog, but you must advocate and show the research here. There are OTHER side effects to the therapies and you have to find the antibiotics that don't cause these other adverse reactions.

Thank you for your research, publications and for being there when I needed answers.
Top

So sorry about your dog's death. I hate it when people lose their pets. Thanks also for the educative post. Seems this forum is loaded with informative posts. I am new to this forum and this post has given me hope.
Top

Ally,
Sorry to here about your dog my moms aussy shepard had the same condition and passed
as well. The vet said there wasn't much he could do for him and he got so weak we had
to put him down. It's like loosing a child our prayers are with you.

Hypothyroidism is the most common endocrinopathy (glandular disorder) in dogs. The thyroid gland, due to inflammation or atrophy of un-known origins, becomes incapable of producing an adequate amount of thyroid hormone, and dogs develop clinical signs of hypothyroidism. The signs are quite variable, because thyroid hormones are needed for normal metabolism, and deficiency can affect nearly all body systems, including the skin, the reproductive tract, the neuromuscular system and the cardiovascular system. Metabolic signs include lethargy, sensitivity to cold, mental dullness, unwillingness to exercise and a tendency to gain weight despite eating less food than normal. Because some of these signs progress fairly slowly, dog owners may unconsciously adapt to the changes in their pets and fail to recognize them as problems Click here for more info.
Last edited by enrique on Sun Jul 01, 2012 3:49 am, edited 1 time in total.
Top 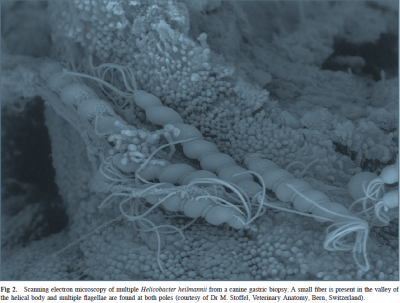 Image of H.Heilmannii from a dog.

Thank you for all the information about Megaesophagus in Dogs (ME). The issue might have been that the treatment for the ulcer was not getting down far enough to be absorbed. At least if you are in USA you can perhaps get a new puppy at my daughter's "puppy cam" web site in NC. The link is "http://www.bluesubi.com/webcam/".
For anyone else thinking about Helicobacter in animals, remember that many animals do carry Helicobacter. It is often of the H.Heilmanii type shown in some beautiful images here: "http://www.vet.cornell.edu/labs/simpson ... impson.pdf". I enclose an image below from that paper.
Actually, the animal Helicobacters are called H.felis (cats) H.cetorum (whales/dolphins) etc. They do cause a gastritis, but this often settles as time goes by so that adult cats have a 50% infection rate with mild gastritis. When elderly, they sometimes do have atrophic gastritis and maybe low acidity so it is a likely cause of bad breath. I treated some cats with Pepto-Bismol and Amoxycillin once (Dye KR, Marshall BJ, Frierson HF, Guerrant RL, McCallum RW. Ultrastructure of Another Spiral Organism Associated with Human Gastritis. Digestive Diseases and Sciences, 1989;34(2):1787-91). I suggest that metronidazole be added to that combination for a faster cure (10 days should suffice). In addition, high dose PPI such as omeprazole 10 mg daily would be an important addition. In retrospect, Pepto-Bismol has bismuth subsalicylate in it and a Methyl-Salicylate flavour - according to some Vet web sites salicylate might be an issue in cats but I suspect that cats with normal renal function are OK with it. However, I believe that the Methyl-Sal (oil of wintergreen) flavour in Pepto seems to give cats a high like that seen with "catnip" in USA. Our treated cats seemed to tolerate it well but had pink material on the fur around their mouths.
In general, the heilmannii type of Helicobacters are easier to eradicate and cause less severe disease that H.pylori. However sometimes they can simulate a lumpy, lymphoma-like lesion in the stomach. Rarely do they cause ulcers. Treatment is similar to H.pylori.
** HUMAN TIP ** One thing to note about human infection with H.heilmannii is that diagnostic tests are less accurate. H.pylori serology would not pick them up, and urea breath tests like the PYtest might not show up the bugs (also CLOtest biopsy urease tests might give false negative results). Therefore, follow up and confirm cure with endoscopic biopsy and histology.

Check the link below for information on hard-to-treat cases. Then search the forums for questions and answers similar to yours.
docs/200808%20stenstrom%20Hp%20Treatment.pdf
Top
Post Reply
5 posts • Page 1 of 1

Return to “Animal Models of Hp”